Innovation is Geographically Distributed; Venture Capital Activity is Not 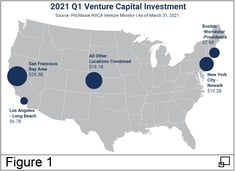 The powerful combination of venture capital and innovation is critical to maintaining the global competitiveness of the U.S. While innovation is widely spread across the country, startup and VC activity in comparison has long been highly concentrated in a few hot spots. A whopping 73% of U.S. VC deal activity (by dollar amount) is in just four combined statistical areas: San Francisco Bay Area, NYC-Newark, Boston-Worcester-Providence, and Los Angeles-Long Beach (Figure 1). 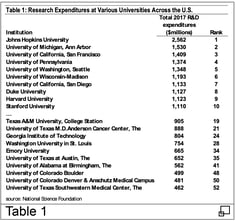 Table 1 shows university research expenditures at the top ten research institutions and selected other universities across the U.S. from which VIC Technology Venture Development portfolio companies have licensed technologies or that VIC regularly evaluates new technologies from. These data are from 2017, the most recent year the data were compiled, but do not typically change dramatically year-to-year. As seen from the table, while the VC hot spots are well represented, innovative research is widely distributed across the country. Thousands of new inventions are conceived each year from a combined $120 billion-plus in annual research expenditures in the nation’s universities and federal laboratories.

Advantages to Investing Outside the VC Hot Spots 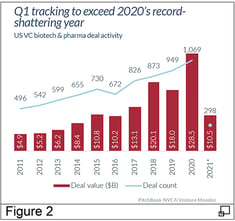 Life science investing is at record levels, with biotech/pharma deals tracking in 2021 to well-exceed the 2020 record-breaking year (Figure 2). However, when investment sectors get hot, pre-money investment valuations can climb dramatically, which is what has occurred in recent life science investments. Indeed, median pre-money valuations have risen from roughly $20m during the period 2011 through 2017, to $45m in Q1 2021. This trend reflects substantial competition for deal flow, especially in the regions where venture capital is concentrated.

The good news for investors is that the valuations outside of the VC hot spots are generally much more attractive. Additionally, driven by the lack of venture capital and the desire to support startup activity, many states have created incentive programs to increase investor return opportunities and mitigate the risk of investing in startups. Making good choices on which companies to invest in remains paramount since no state incentive will overcome (or “compensate for”) bad investment choices. But with good opportunity screening and informed due diligence, the advantages to investors offered by certain state incentives can be substantial.

VIC has operations across the country (Figure 3) and incentive programs vary from state-to-state, but let’s look at the programs available in two of VIC’s locations – Fayetteville, Arkansas and Boulder, Colorado – and consider how beneficial these types of programs can be to startups. Table 2 describes the most important incentive programs applicable to life science startups offered in these two states. 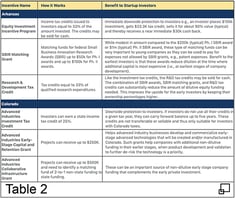 As indicated in the table, benefits to investors include significantly protecting the downside (e.g., sellable investment tax credits that quickly return a significant portion of the original investment to the investor) and improved upside through substantially reduced dilution to the early investors. Besides Arkansas and Colorado, many states outside of the VC hot spots offer a variety of incentives and support programs.

Overcoming Challenges to Investing Outside the VC Hot Spots

While the incentives for early-stage life science investing outside of the geographic hotspots can be significant, there are also challenges facing both investors and the companies raising capital. Depending on the specific location, the most critical challenges are typically lack of experienced life science personnel, few life science-focused investors, and lack of well-vetted deal flow.

Usually, new life science companies are formed where top-tier research institutions are located and there is a pool of young scientific and engineering talent available to draw from. However, there may not be top executive level talent available nor highly experienced project managers. One solution is to have a distributed team where the research and development is in one location and the executive team is elsewhere, especially during the early years of a given company’s growth. As the company matures and acquires substantial funding, it becomes better positioned to attract experienced, industry-specific talent from other locations. For VIC portfolio companies, a complete “done-it-before” executive team is placed at the formation of each new company in the portfolio. Typically, one of VIC’s Managing Directors serves as interim CEO through the early phases. The permanent team is brought in 18- to 24-months later once the company has established tangible traction and further de-risked the innovation. In addition, each VIC portfolio company can draw on a complete administrative team, scientific and engineering resources, and more, on an as-needed basis. A nationwide network of technical and operational acumen through the VIC Strategic Advisory Board and the nationwide VIC Advisory Network provides a pool of supplemental expertise. Having this combination of collective resources available is a significant advantage for VIC portfolio companies, the majority of which have been (and will continue to be) formed outside the traditional VC hot spots.

Equally important and worth noting is the point that well-vetted deal flow is not an issue for investors participating in VIC portfolio investment opportunities through VIC’s affiliated nationwide VIC Investor Network. They have the advantage of being able to co-invest on the same terms with VIC and other experienced life science investors where every deal that is presented as an investment opportunity has already gone through deep due diligence by a team of subject matter experts.

Innovation is widely distributed across research institutions nationwide. Venture capital, however, is highly concentrated in a few geographic regions. This tends to drive valuations higher in the areas where venture capital is concentrated and provides impetus to states where VC activity is low to offer incentive programs for technology- and science-based startups. The combination of lower valuations and attractive incentive programs can significantly increase the upside for investors and mitigate downside risks.However, challenges such as lack of experienced talent and reduced access to capital can be problematic, especially in high market entry barrier sectors such as life science companies (i.e., capital intensive, regulatory barriers, etc.). Using a distributed team approach is one strategy for overcoming this issue, and for VIC portfolio companies, VIC provides experienced talent and the VIC Investor Network helps address the problem of sourcing early-stage, risk-tolerant capital.