As Akeso Biomedical embarks on its first in-the-field trials of its flagship product, CI-FERTM, it’s worthwhile looking back on the five-year journey that has taken us to this pivotal moment – years of product development, in vitro and pen trials, regulatory approvals, and revealing discussions with prospective customers and commercialization partners. Akeso was launched by VIC as a new startup company in 2014, to help solve a large growing global health issue, on the heels of research conducted by a team of three scientists at the University of Nottingham in the UK. The scientists had identified a molecule which seemed to have activity against Campylobacter, a bacterium quite well known in Europe, but—despite being equally present in the US and around the world—quite unknown among Americans until recently. Campylobacter has been and continues to be a major cause of human disease worldwide.

The backstory of Campylobacter is an interesting one, and one which is tied to the steadily rising global economy, especially the rising wealth of many peoples. One of the great benefits of most countries’ growing economies has been their ability to afford a greater array of many of life’s necessities and luxuries  such as medicine, shelter and more nourishing food. When it comes to food, a key characteristic of a wealthier society is a higher per capita consumption of meat.  Newer approaches to ranching, coupled with improved genetics and animal husbandry, have made meat more accessible to a growing human population. When we delve deeper into what sort of meat people choose to consume, broiler meat–meat from chickens–is the clear winner in the US and abroad. Domestically in the early 1990s, chicken meat displaced beef as the number one source of animal protein, and the trend has continued ever since. 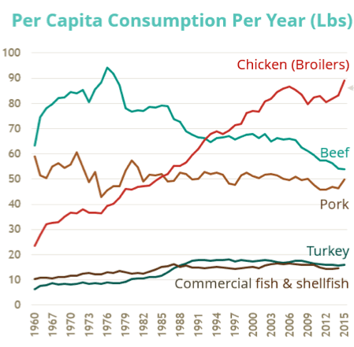 However, there is a significant problem with chicken meat: Chickens harbor Campylobacter and can transmit it to humans. Globally, Campylobacter from chicken is the leading foodborne illness in humans; more people get sick from Campylobacter than from Salmonella, E. coli and listeria combined. Normally, the result is several lost days of work feeling nauseous in bed.  But in rare cases, it can lead to Guillain-Barré syndrome, a neurological condition in which the immune system attacks the nerves, leading to paralysis and even death.

Until recently and still to a large extent today, antibiotics have been given prophylactically to livestock; about 75% of all antibiotics globally are administered to animals, not humans. This wholesale administration of antibiotics, however, has caused many pathogenic bacteria to become resistant, rendering them less effective at containing pathogens, but also allowing the pathogenic bacteria to transmit antibiotic-resistant genes to other bacteria common to poultry, and even to bacteria in humans. The overall result has been an increasing vulnerability of humans to bacterial disease. A small injury or simply being coughed upon can lead to a pathogenic infection by a bug that is resistant to all antibiotics, leading to death. In the US alone, 23,000 people now die each year because they are sick with an infection by a bacterium that has acquired genes conferring resistance to all available human antibiotics. 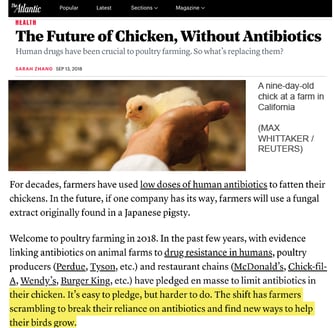 As a result of this trend, there has been a popular outcry, first in developed countries and now globally, for the removal of all antibiotics from animal feed. Treating a sick animal with antibiotics if necessary is permitted and even encouraged, but administering them prophylactically en masse to livestock is increasingly under scrutiny, and many farmers are adapting to these new guidelines.

The challenge still remains, however, that antibiotics have helped to contain and preempt disease among livestock, leading not only to fewer deaths, but also improved growth, factors that directly impact the economics of ranching.  So, as antibiotics are being removed from animal feed, ranchers are looking for alternatives to recoup the performance boost and animal health benefits the antibiotics have provided in the past, without causing the emergence of antibiotic-resistant pathogens. Although many alternatives have been promoted, the vast majority of these lack the effectiveness, consistency, low cost, and shelf-stability required by the global livestock industry.

CI-FER as a non-antibiotic alternative

What the three researchers at the University of Nottingham originally discovered is that a precursor molecule to CI-FER could impede Campylobacter from forming a biofilm. In other words, the Campylobacter cannot attach to the gut wall of the chicken and instead continues to travel down the intestine and be excreted. Since Campylobacter is an anaerobic (oxygen-hating) bacteria, it is incapable of surviving in an aerobic environment. It is important to note, however, that the precursor molecule, as well as CI-FER itself, do not inhibit the growth of Campylobacter nor do they kill the bacterium: It is not an antibiotic, and therefore it should not engender resistance.

At Akeso, we would later conduct over a dozen pen trials on broilers in the UK, Germany, Greece and in the US where we confirmed the activity against Campylobacter, reducing both incidence and log values in the birds.  In these trials, we found that CI-FER was also effective against other pathogenic bacteria such as Salmonella, E. coli and Clostridium while not harming the beneficial bacteria in the animals’ intestine. We believe that this broad-spectrum activity against harmful pathogens likely underlies the performance boost that CI-FER provides the animals, leading to dramatically lower mortalities, improved body weight and other factors which growers desire. 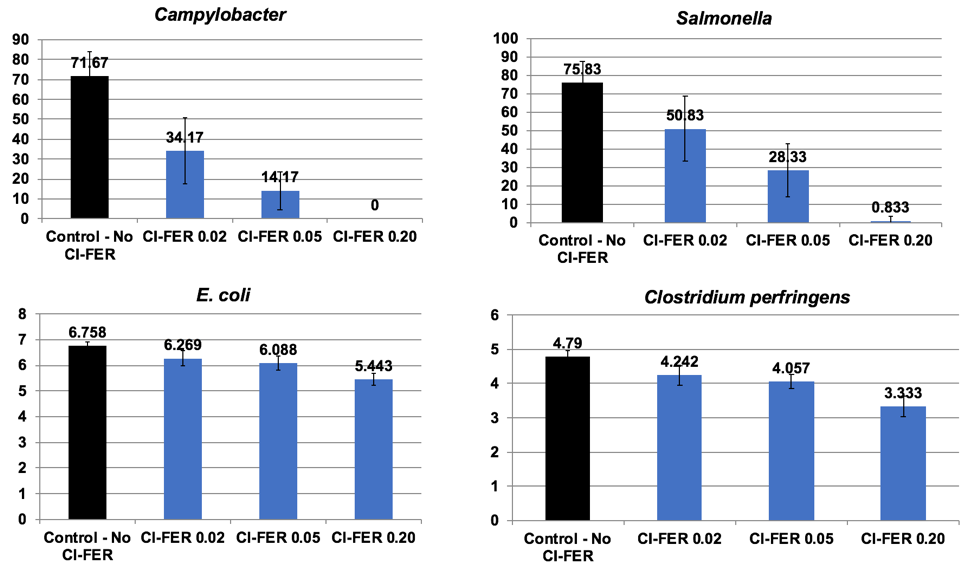 Following discussions with research directors at the trial centers and in animal healthcare companies who suggested that our technology may apply to other livestock, we began trials in pigs and found that CI-FER was also effective at improving the health and weight of weaned piglets. In addition, we have been able to make an Independent GRAS (Generally Regarded as Safe) Conclusion for CI-FER based on our trials and safety data, clearing the way to sell the product in the US as a safe and effective source of iron, with the added benefit of clearing livestock of bacteria harmful to humans. Currently, efforts to obtain regulatory approval and thereby commercialize CI-FER for broilers and weaned piglets in Europe are also in progress.

The company has filed patent applications in the US, Canada, Europe, Brazil, and China, with our first eight patents being granted in the last year and many more applications pending. In conjunction with this effort, we have been in negotiations with several potential partners in the US and Europe to establish a manufacturing supply chain. At this point, we can supply quantities in the tens-of-tons range, and we anticipate being at the hundreds-of-tons range in the next 6 to 12 months.

Going to the field

The most exciting part of this journey has been our conversations with prospective customers and global distributors. We have initiated discussions with major meat-producers in the US and Europe, and we are planning jointly evaluating CI-FER in field trials during which the animals are given CI-FER in their feed instead of an antibiotic. We expect to run the first such trials in Q4 of this year and Q1 of next year. Successful trials will then lead to first sales of our product.

In parallel with these discussions, we are in talks with a group of animal feed additive companies and animal healthcare companies. They have reviewed our pen trial data and have been impressed with CI-FER’s performance. These companies have global salesforces and are always on the lookout for new technologies to add to their product portfolios. A partnership with one of these companies would give us a means to substantially ramp up sales volumes and provide a strong exit for the shareholders.

We are delighted to be on the cusp of commercial success as we head into field testing and derive great satisfaction in knowing that our product can help animals, farmers, and consumers globally as we contribute to the reduction of overuse of antibiotics in animal feed and the reduction of pathogen infections in people.