For decades, only venture capital (VC) firms, and very rarely, angels were able to invest in start-up companies developing life science—therapeutics, medical devices, diagnostics, and related—innovation.  Anyone doing so needed deep domain expertise to make heads or tails of what were typically fairly complex and esoteric concepts.  The “great recession” of 2007-2009, however, indelibly altered the landscape.  During this period of global economic slow-down, many life science-focused VCs, especially small- to mid-sized funds, shut down due to a lack of exits (especially via IPO), Limited Partner dissatisfaction, and waning appetite for the large capital investments required to bring life science technologies to market.  Although new investor groups have emerged in the last decade, many follow a narrower investment thesis, prioritizing segments of the industry perceived to have lower risk: digital health, healthcare IT, cleantech, etc.  Some firms that historically played in the life science space, now avoid it altogether and limit their purview to digital technologies.  This shift leaves a significant innovation gap and creates an opportunity for new investment models in an increasingly compelling sector.

A second development during the past several decades is the growing reticence of prospective partners (i.e. large pharma and medtech companies) to invest in or acquire assets prior to obtaining pivotal proof-of-concept results that de-risk the technology as much as possible.  This is particularly ironic given the exit of these life science entities from the research and development world.  When combined, these two issues have led to a heightened need to create and fund new companies that provide much-needed innovation to fuel big company product pipelines, while doing so cost-effectively and with the longer-term play in mind: acquisition driven by validated assets.  In other words, build the company for sale earlier along its lifecycle instead of pursuing an IPO which requires significantly more funding (stay tuned for a future VIC white paper that delves deeper into this topic).

Another trend happening in parallel, and germane to the lack of exits for VCs touched on in the opening paragraph, is the ongoing decrease in the number of companies (including life sciences) trading on US public markets (NYSE and NASDAQ), which has shrunk by 50% from a peak of 8,090 in 1996 to 4,397 in 2018.  By-in-large, this is the result of: 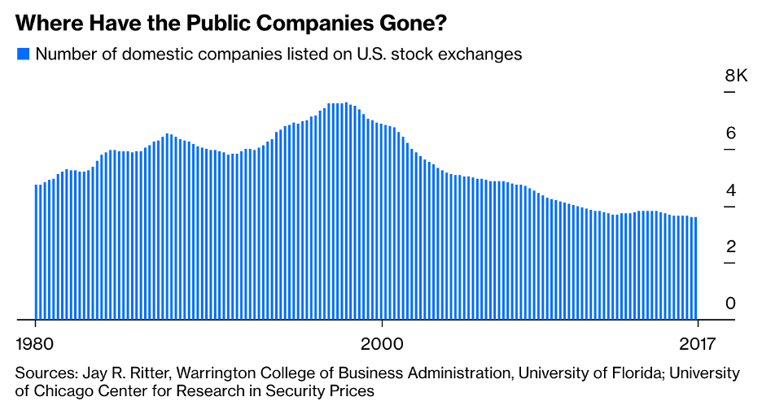 Yet, as we all know, nature-and capital markets-abhor a vacuum.  Enter the new players in life science investing.  Because an increasing percentage of the world’s population is placing bets in a decreasing number of publicly traded companies through their retirement portfolios (e.g. IRA, 401(k)), there is the perception (rightly so) that there isn’t significant upside: the public markets broadly defined are overvalued.  The result?  A growing desire by both individuals and groups that previously did not play in the space to tap into a unique asset class with greater growth potential not available to the masses: promising, privately-held, innovative life science startups.  These include the following categories with representative examples in parenthesis:

Left out of the mix are individual, accredited investors: individuals with a net worth of at least $1m or income of $200k who do not have a mechanism through which they can invest in privately held life science companies, only publicly-traded ones, which—as mentioned above—do not have as much potential for value growth.  To read more on this topic, please refer to the Atlantic article, “The Death of the IPO: The number of IPOs is declining, and that could mean that small investors are getting shut out of the most lucrative deals.” 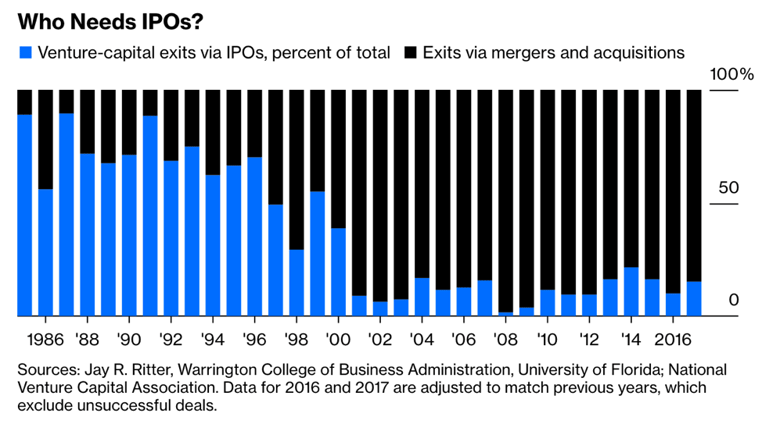 What is the individual, accredited investor supposed to do?  They might contemplate joining an angel network to access deal flow.  This assumes that the group invests in life science- and technology-based (IP-driven) opportunities.  Unfortunately, many angel groups don’t play in this realm.  This is in large part due to not having the requisite in-house technical expertise to evaluate with authority drug, medical device and diagnostics innovation across a long list of therapeutic areas (cardiovascular, CNS, immune/inflammatory, infectious disease, oncology, respiratory, etc.).  In addition, angel networks are sometimes more social events than rigorous investment forums.  Last but not least, angels usually put money to work in pre-existing companies that bring with them the usual issues: unrealistic pre-money valuations, inexperienced management, and a lack of focus and progress.  This is not the case for entities that create de novo companies based on innovation licensed directly from the source universities.  By starting with a clean slate, many of these problems can be avoided altogether [White Paper: Accessing Innovation Directly from the Source].

A newer mechanism facilitating access to private life science opportunities by individual, accredited investors has been the emergence of so-called Equity Crowdfunding through sites such as CrowdCube, Seedrs, WeFunder.  Obviously, the investor is completely on their own in this situation, and the advantage of having domain-specific technical and operating acumen during the diligence process discussed in the previous paragraph is even more critical here.  Sifting through intellectual property, scientific publications, financial documents, legal agreements, etcetera (if accessible)—as well as the longer-term management and oversight of the resulting investments, quickly can become an insurmountable task for someone in unchartered waters.

From all of this, what is the take-home message?  Innovation in the life sciences is essential as the healthcare industry faces significant headwinds, such as provider shortages, increasing rates of obesity and related diseases such as diabetes and heart disease, as well as an aging population overall.  Investing in new drugs, medical devices, and diagnostics can be highly lucrative for investors equipped with the right expertise and a willingness to play the long game.  The changes to the venture capital landscape that followed the great recession, and the mixed track record of angel groups operating in the life sciences leave a void that is increasingly attractive, not only to private equity firms looking for an alternative to the public market, but also to individual investors seeking opportunities once accessible only to a privileged few.

About the VIC Investor Network.  A unique and compelling aspect of the VIC model is the Investor Network (VIN), which directly addresses the challenges of accredited, individuals accessing high-quality, vetted, privately held life science and technology deal flow.  Traditional venture capital funds are typically derived from large financial commitments (millions of dollars or more) from limited partners or LPs.  These LPs are often corporations, endowments, family offices, foundations, fund of funds, pension funds and ultra-high-net-worth investors.  In contrast, individuals can participate in VIN at a minimum annual commitment of $30k, which can be allocated as $5k investments across as many as 6 different portfolio companies.  VIN members have the option to take more than one $30k “slot” during any given 12 month period.  It’s important to highlight that VIC identifies and evaluates hundreds of potential investment opportunities sourced directly from universities, institutes and national labs around the world, applying a rigorous, subject-matter led assessment process resulting in the formation of up to 8-10 new companies per year.  Another critical component is the management of these startups by VIC personnel, providing close oversight of the VIN portfolio.  A more detailed description of VIN can be found here.